Dawn and I attended the International Fight League card September 9th in Portland. The first half of the card will be featured on Fox Sports Net on Sunday September 24th at Six. The last half of the card will air on Sunday October First on FSN also at Six o'clock. Even though Dawn and I were still trying to figure out our digital camera, she was able to take some very nice pictures. These are some of my favorites. Allan Goes is on the big screen doing and interview with FSN while Devin Cole (in the foreground in the ring and the background on the big screen) is consoled by his Portland Teamates.Cole was domintaing the bout until he was caught in a submission hold and had to tap out. 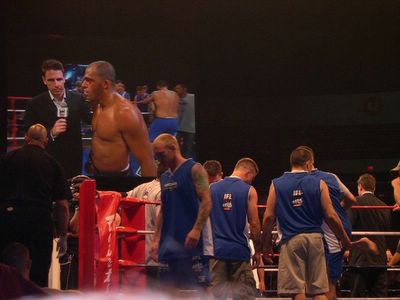