What do you call the person who defeated the greatest?

Joe Frazier faced Muhammad Ali in the fight of the century March 8th 1971. On that night with the entire world watching Joe Frazier rose to the occasion. For 15 rounds Smokin Joe out worked, out hustled and out gutted Ali. The final round was punctuated with a thunderous left hook that sent Ali crashing to the canvas. Minutes later Joe Frazier was announced the unanimous winner. Ali may have been the greatest, but on that night in Madison Square Garden Joe Frazier was the better man and proved that he was the undisputed champion of the world.

You cannot be a boxing fan and not appreciate Joe Frazier. Frazier was not the biggest puncher or the most gifted boxer. Smokin Joe vanquished his opposition by shear force of will. He moved forwards constantly throwing punches "smokin" while daring his opponent to return fire.

Frazier's losses demonstrated his courage and determination as much as his victories.

The first fight with George Foreman is remembered partially for Howard Cosell iconic call "down goes Frazier". (a call that I have enjoyed impersonating over the years). What has to be remembered is not just the knock downs but the fact that Frazier kept popping back up. Facing one of the hardest punchers in the sports history Joe Frazier refused to back down.

The Thrilla in Manila has to be seen to be believed. In their third bout Ali and Frazier battled with an intensity that would have had you believing that the looser and his family would be fed to a pride of lions. Going into the 15th round Frazier was ready to continue the battle even though he was virtually blind. It took the heroic actions of Frazier's trainer Eddie Futch to stop the fight and avoid tragedy that evening.

Joe Frazier may not have been the greatest fighter or the greatest showman. But, you can make the argument he had the greatest amount of heart, will and determination and in some ways maybe that is even more impressive.
Posted by steve at 5:47 PM 2 comments:

THE NBA PLAYOFF REVIEW ROUND I

At the start of this series the Celtics looked like a tired old prize fighter that new his best days were over. Then they realized how truly awful the Knicks were. Instead of receiving an embarrassing beating they had a blast they swept the series threw a few bolo punches did the Ali shuffle and had many onlookers believing they were once again a title contender. I could be wrong but I see the Celtics running out of gas before they can win three more grueling play of series.

Like a good pro wrestling heel Miami is great at beating up inferior teams. The 6er's weren't complete jabronies they were more like mid carder gatekeepers. Guys that beat the jabronies and get some offense in against the stars making you think they might pull the big upset but never do. As far as the the Moheatos go I see them having a 50/50 chance against both the Celtics and the Bulls. Much of it depends on the elephant in the room which is the officiating. The Heat take the ball to the basket and force the refs to make calls. Will the officials give the James and Wade tag team the benefit of the doubt on the offense end and then turn and argue with the coaches while the J&W express get away with under handed tactics on the other end of the court. At time the NBA really is more like pro wrestling/sports entertainment then some would like to admit.

The Hawks are a very athletic team. In contrast the Magic are so unauthentic on the perimeter that I could see them having trouble guarding some WNBA teams. So the Hawks were a nightmare match up for them. Still Atlanta managed to have one complete no show performance where they got blown out by almost thirty points. Atlanta has the players to give the Bulls problems but there is no way they are going to out work Derick Rose and the Bulls over a seven game series.

The Pacers were very scrappy. Like a true super star Derick Rose refused to let the Bulls loose any of the first three games(even though they were outplayed). The Bulls have a shot to get to the finals. Especially if the they get a tired Celtic team in the eastern conference finals.

I could copy and paste my Celtic observations here in regards to the Lakers. The entire series felt like a scrimmage where the coach has the star point guard play with the junior varsity and they proceed to give the varsity team fits. Chris Paul was AWESOME in this series, but the Lakers had way more problems then they should have had. Fortunately for the Lakers they get to play Dallas in the next round. The Mavericks have almost as many miles on their odometer as the Lakers do and the Lakers match up very well with Tham. If the Lakers advance to the Western conference finals the pendulum swings in the other direction and the Lakers three peat may be in jeopardy.

Nice seeing Brandon Roy play well in Portland. It was not good that the Blazer were down 23 on their own home court in a pivotal 5Th game. The Mavericks were just to much for the Blazers to handle.

This series was like watching a 42 year old dad playing his 15 year old son in a game of one on one. In the past dad always won, but this spring they step on the court and dad realizes the kid is a step faster and almost as tall. Where once he could toy with the kid and win now he realizes the kid can blow by him off the dribble at will. So dad has to reach deep down into his bag of tricks to hold off the precocious 15 year old but in the end youth prevails. That is what happened to the Spurs they used every trick in their arsenal, but in the end it was not enough. 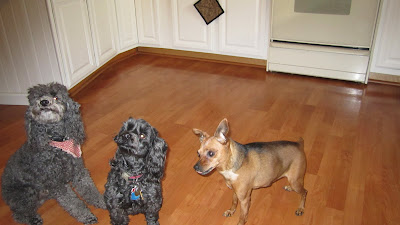 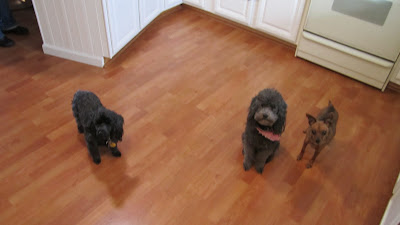 Five years ago, before we had our own dogs we took care of Tag for an extended period of time. It was nice having him over at the house this weekend while his person recouperates
Posted by steve at 7:54 PM 1 comment: 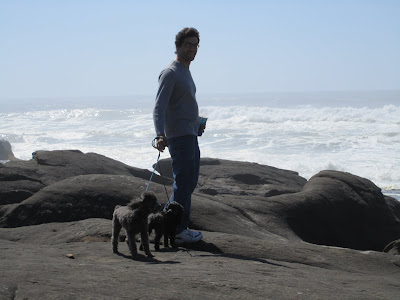 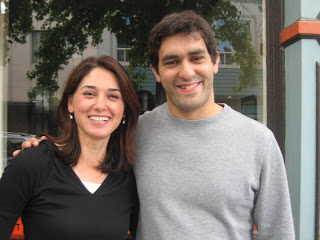 On Monday I traveled to Spokane. One of the pieces of equipment I got to play with was the virtual reality welder. It was very impressive.